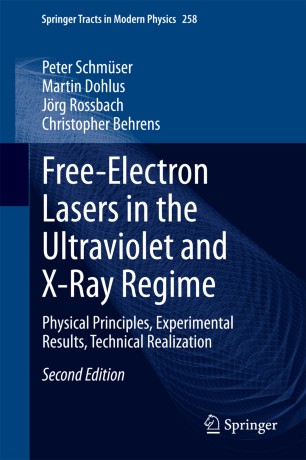 Free-Electron Lasers in the Ultraviolet and X-Ray Regime

The main goal of the book is to provide a systematic and didactic approach to the physics and technology of free-electron lasers. Numerous figures are used for illustrating the underlying ideas and concepts, and links to other fields of physics are provided. After an introduction to undulator radiation and the low-gain FEL, the one-dimensional theory of the high-gain FEL is developed in a systematic way. Particular emphasis is put on explaining and justifying the various assumptions and approximations that are needed to obtain the differential and integral equations governing the FEL dynamics. Analytical and numerical solutions are presented and important FEL parameters are defined, such as gain length, FEL bandwidth and saturation power. One of the most important features of a high-gain FEL, the formation of microbunches, is studied at length. The increase of gain length due to beam energy spread, space charge forces, and three-dimensional effects such as betatron oscillations and optical diffraction is analyzed. The mechanism of Self-Amplified Spontaneous Emission is described theoretically and illustrated with numerous experimental results. Various methods of FEL seeding by coherent external radiation are introduced, together with experimental results. The world’s first soft X-ray FEL, the user facility FLASH at DESY, is described in some detail to give an impression of the complexity of such an accelerator-based light source. The last chapter is devoted to the new hard X-ray FELs which generate extremely intense radiation in the Angstrøm regime. The appendices contain supplementary material and more involved calculations.