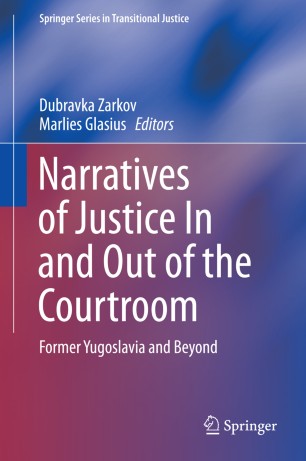 Narratives of Justice In and Out of the Courtroom

Former Yugoslavia and Beyond

This volume considers the  dynamic relations between the contemporary practices of international criminal tribunals and the ways in which competing histories and discourses of war, violence and justice are re-imagined and re-constructed in the former Yugoslavia and beyond. There are three innovative aspects of the book. The first is the focus on narratives of justice and their production, the second  is its comparative perspective, and the third is its multidisciplinary angle.

While legal scholars have tended to analyze transitional justice and the international criminal tribunals in terms of their success or failure in establishing the facts of war crimes, this volume goes beyond a ‘score-card’ approach. It investigates how the courts create a symbolic space within which competing narratives of crimes, perpetrators and victims are produced, circulated and contested. It analyzes how international criminal law and the courts gather, and in turn produce, knowledge about societies in war, their histories and identities, and their relation to the wider world.

It then proceeds to analyze how this knowledge corresponds to the discourses and practices within these societies. The volume situates narratives of transitional justice both within specific national spaces - such as Serbia, Bosnia and the Netherlands - and beyond them, in the international context of  the practices of transitional  justice institutions.  In this way, this collection considers experiences from other times (the Nuremberg Tribunal) and other countries (Rwanda, Sierra Leone and Liberia)  to offer a sounding board for re-thinking the meanings of transitional justice and its institutions within former Yugoslavia.

Finally, the book frames all of those narratives and experiences within the global dynamics of mediated communication, where media practices are as important as practices of law, and where personal testimonies, expert knowledge, and visual images compete in establishing, and contesting, not just the facts of the crimes but also the meanings of those facts.

These original aspects of this book make it an excellent resource for researchers in law, social science and humanities, for those interested in the former Yugoslavia, and for human rights activists  and transitional justice practitioners.