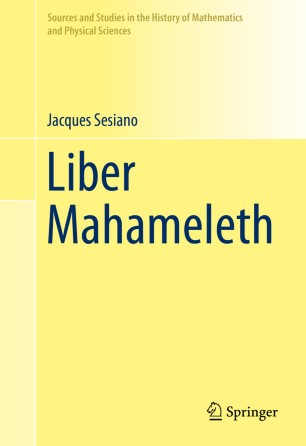 The Liber mahameleth is a work in Latin written in the mid-12th century based (mainly) on Arabic sources from Islamic Spain. It is now our principal source on mathematics in Islamic Spain at that time; There are few extant Arabic texts and no one is as complete as the LM. It is also the second largest mathematical work from the Latin Middle Ages (the other is by Fibonacci, some 50 years later).

Since the three main manuscripts preserving it are incomplete and there are many scribal errors, a reliable Latin text has been established, which reports (in notes) the various readings of the manuscripts and the errors in them. This is how a so-called critical edition is made. This edition of the Latin text is preceded by General Introduction, describing the various manuscripts, the content of the work and what we know about its author.

Part Two of the volume is a translation of the text and ends with a glossary of Latin terms. The glossary will be of great importance for the knowledge of Latin scientific terms from that time, since there is no other mathematical text of this size from the 12th century. Part Three begins with a short introduction and then analyzes all the problems from the text, with a summary of the mathematical methods involved in each chapter. The commentary is a companion to the translation and explains the author's solving methods.