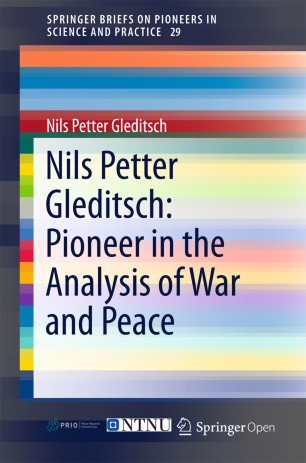 Nils Petter Gleditsch: Pioneer in the Analysis of War and Peace

Part of the SpringerBriefs on Pioneers in Science and Practice book series (BRIEFSPIONEER, volume 29)

This book presents Nils Petter Gleditsch, a staff member of the Peace Research Institute of Oslo (PRIO) since 1964, a former editor of the Journal for Peace Research (1983-2010), a former president of the International Studies Association (2008-2009) and the recipient of several academic awards as a pioneer in the scientific analysis of war and peace. This unique anthology covers major themes in his distinguished career as a peace researcher. An autobiographical, critical retrospective puts his work on conflict and peace into a broader context, while a comprehensive bibliography documents his publications over a period of nearly 50 years. Part II documents his wide-ranging contributions on globalization, democratization and liberal peace, on international espionage, environmental security, climate change and conflict and on the decline of war and more generally of violence as a tool in conflict.