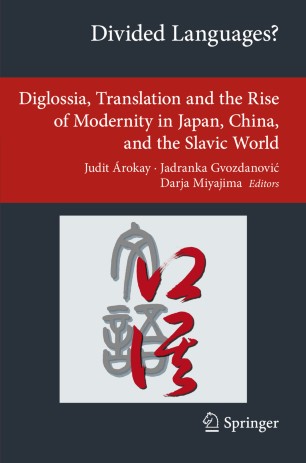 Diglossia, Translation and the Rise of Modernity in Japan, China, and the Slavic World

The present volume is a collection of papers presented at the international conference “Linguistic Awareness and Dissolution of Diglossia” held in July 2011 at Heidelberg University. The aim is to reevaluate and compare the processes of dissolution of diglossia in East Asian and in European languages, especially in Japanese, Chinese and in Slavic languages in the framework of the asymmetries in the emergence of modern written languages. Specialists from China, Japan, Great Britain, Germany and the U.S. contributed to the volume by introducing their research focusing on aspects of the dissolution of diglossic situations and the role of translation in the process. The first group of texts focuses on the linguistic concept of diglossia and the different processes of its dissolution, while the second investigates the perception of linguistic varieties in historical and transcultural perspectives. The third and final group analyses the changing cultural role and function of translations and their effect on newly developing literary languages.