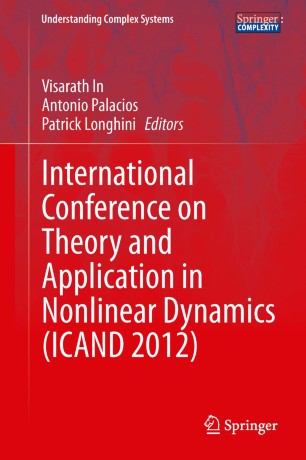 International Conference on Theory and Application in Nonlinear Dynamics (ICAND 2012)

A collection of different lectures presented by experts in the field of nonlinear science provides the reader with contemporary, cutting-edge, research works that bridge the gap between theory and device realizations of nonlinear phenomena.

Representative examples of topics covered include: chaos gates, social networks, communication, sensors, lasers, molecular motors, biomedical anomalies, stochastic resonance, nano-oscillators for generating microwave signals and related complex systems. A common theme among these and many other related lectures is to model, study, understand, and exploit the rich behavior exhibited by nonlinear systems to design and fabricate novel technologies with superior characteristics. Consider, for instance, the fact that a shark’s sensitivity to electric fields is 400 times more powerful than the most sophisticated electric-field sensor. In spite of significant advances in material properties, in many cases it remains a daunting task to duplicate the superior signal processing capabilities of most animals. Since nonlinear systems tend to be highly sensitive to perturbations when they occur near the onset of a bifurcation, there are also lectures on the general topic of bifurcation theory and on how to exploit such bifurcations for signal enhancements purposes. This manuscript will appeal to researchers interested in both theory and implementations of nonlinear systems.