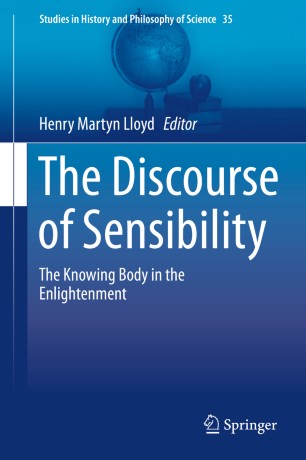 The Discourse of Sensibility

The Knowing Body in the Enlightenment

Part of the Studies in History and Philosophy of Science book series (AUST, volume 35)

This volume reconstructs the body of sensibility and the discourse which constructed it. The discourse of sensibility was deployed very widely throughout the mid- to late-eighteenth century, particularly in France and Britain. To inquire into the body of sensibility is then necessarily to enter into an interdisciplinary space and so to invite the plurality of methodological approaches which this collection exemplifies. The chapters collected here draw together the histories of literature and aesthetics, metaphysics and epistemology, moral theory, medicine, and cultural history. Together, they contribute to four major themes: First, the collection reconstructs various modes by which the sympathetic subject was construed or scripted, including through the theatre, poetry, literature, and medical and philosophical treaties. It secondly draws out those techniques of affective pedagogy which were implied by the medicalisation of the knowing body, and thirdly highlights the manner in which the body of sensibility was constructed as simultaneously particular and universal. Finally, it illustrates the ‘centrifugal forces’ at play within the discourse, and the anxiety which often accompanied them.

At the centre of eighteenth-century thought was a very particular object: the body of sensibility, the Enlightenment’s knowing body. The persona of the knowledge-seeker was constructed by drawing together mind and matter, thought and feeling. And so where the Enlightenment thinker is generally associated with reason, truth-telling, and social and political reform, the Enlightenment is also known for its valorisation of emotion. During the period, intellectual pursuits were envisioned as having a distinctly embodied and emotional aspect. The body of ‘sensibility’ encompassed these apparently disparate strands and was associated with terms including ‘sentimental’, ‘sentiment’, ‘sense’, ‘sensation’, and ‘sympathy’.