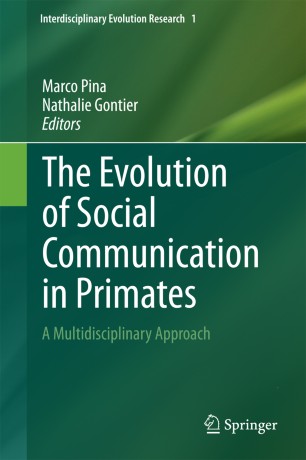 The Evolution of Social Communication in Primates

How did social communication evolve in primates? In this volume, primatologists, linguists, anthropologists, cognitive scientists and philosophers of science systematically analyze how their specific disciplines demarcate the research questions and methodologies involved in the study of the evolutionary origins of social communication in primates in general, and in humans in particular. In the first part of the book, historians and philosophers of science address how the epistemological frameworks associated with primate communication and language evolution studies have changed over time, and how these conceptual changes affect our current studies on the subject matter. In the second part, scholars provide cutting-edge insights into the various means through which primates communicate socially in both natural and experimental settings. They examine the behavioral building blocks by which primates communicate, and they analyze what the cognitive requirements are for displaying communicative acts. Chapters highlight cross-fostering and language experiments with primates, primate mother-infant communication, the display of emotions and expressions, manual gestures and vocal signals, joint attention, intentionality and theory of mind. The primary focus of the third part is on how these various types of communicative behavior possibly evolved, and how they can be understood as evolutionary precursors to human language.  Leading scholars analyze how both manual and vocal gestures gave way to mimetic and imitational protolanguage, and how the latter possibly transitioned into human language. In the final part, we turn to the hominin lineage, and anthropologists, archeologists and linguists investigate what the necessary neurocognitive, anatomical and behavioral features are in order for human language to evolve, and how language differs from other forms of primate communication.

Marco Pina has a background in medicine which he applies to topics in philosophy of biology and philosophy of medicine. He is currently preparing a doctoral dissertation on the development of the mind-brain dyad in the context of the nature/nurture debate, which is funded by the Portuguese Fund for Science and Technology and executed at the Faculty of Science of the Portuguese University of Lisbon. Previously, as a scientific collaborator for the Centre for Philosophy of Science of the University of Lisbon as well as its Applied Evolutionary Epistemology Lab, he has edited several books on evolutionary theory, language evolution, and the evolution of man.

Nathalie Gontier is a philosopher of science and an anthropologist. Her main research interests lie in evolutionary epistemology and non-Darwinian evolutionary theories, how the latter differ from the Modern Synthesis and how they can be implemented into the linguistic sciences and the overall sociocultural domain. As the founding director of the Lisbon Applied Evolutionary Epistemology Lab, she is affiliated to the Centre for Philosophy of Science at the Faculty of Science of the University of Lisbon, and financed by the Portuguese Fund for Science and Technology. Previous appointments were held at the Dutch Free University of Brussels (Belgium), the Konrad Lorenz Institute (Austria), and the American Museum of Natural History (USA). Her research has been sponsored by the American John Templeton Foundation, the European Marie Curie Actions and the Belgian Fund for Scientific Research Flanders. She is the founder and editor-in-chief of the Springer book series Interdisciplinary Evolution Research.

“This volume provides a review of some of the many theoretical frameworks proposed to investigate the evolution of social communication in primates and in particular language in humans. … a rich, thought-provoking, and multidisciplinary book that would appeal to any scholar interested in the origins and evolution of language and communication.” (Roberta Salmi, The Quarterly Review of Biology, Vol. 90, September, 2015)

“This edited volume aims to provide a … series of reviews and critiques of most currently available methodological and theoretical frameworks that guide research on the mechanisms and evolution of primate social communication and human language. … Summing Up: Recommended. Graduate students and researchers/faculty.” (J. B. Leca, Choice, Vol. 52 (6), February, 2015)
Buy options