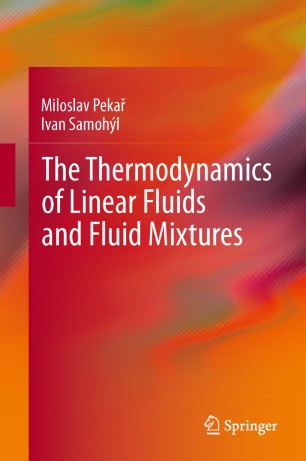 The Thermodynamics of Linear Fluids and Fluid Mixtures

In this book, Samohýl and Pekař offer a consistent and general non-equilibrium thermodynamic description for a model of chemically reacting mixtures. This type of model is frequently encountered in practice and up until now, chemically reacting systems (out of equilibrium) have rarely been described in books on non-equilibrium thermodynamics. Readers of this book benefit from the systematic development of the theory; this starts with general principles, going through the applications to single component fluid systems, and finishing with the theory of mixtures, including chemical reactions. The authors describe the simplest mixture model – the linear fluid – and highlight many practical and thermodynamically consistent equations for describing transport properties and reaction kinetics  for this model. Further on in the book, the authors also describe more complex models. Samohýl and Pekař  take special care to clearly explain all methodology and starting axioms and they also describe in detail applied assumptions and simplifications. This book is suitable for graduate students in chemistry, materials science and chemical engineering as well as professionals working in these and related areas.