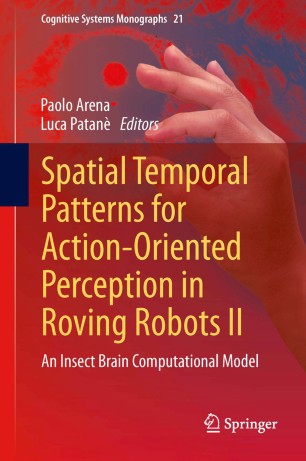 This book presents the result of a joint effort from different European Institutions within the framework of the EU funded project called SPARK II, devoted to device an insect brain computational model, useful to be embedded into autonomous robotic agents.

Part I reports the biological background on Drosophila melanogaster with particular attention to the main centers which are used as building blocks for the implementation of the insect brain computational model.

Part II  reports the mathematical approach to model the Central Pattern Generator used for the gait generation in a six-legged robot. Also the Reaction-diffusion principles in non-linear lattices are exploited to develop a compact internal representation of a dynamically changing environment for behavioral planning.

In Part III  a software/hardware framework, developed to integrate the insect brain computational model in a simulated/real robotic platform, is illustrated. The different robots used for the experiments are also described.  Moreover the problems related to the vision system were addressed proposing robust solutions for object identification and feature extraction.

Part IV includes the relevant scenarios used in the experiments to test the capabilities of the insect brain-inspired architecture taking as comparison the biological case. Experimental results are finally reported,  whose multimedia can be found in the SPARK II web page: www.spark2.diees.unict.it