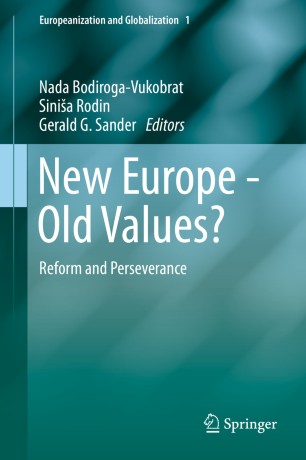 Part of the Europeanization and Globalization book series (EAG, volume 1)

This book explores the reactions to Europeanization and globalization in times of economic distress, including the transformation of European values in national legal cultures. The authors explore how European values, tradition and new legal challenges interconnect and dictate the paths of transition between old and new Europe. The first chapter starts with a question: can Roman Legal Tradition play a role of identity factor towards a New Europe? Can it be considered as a general value identifying new Europe, built on a minimum core of principles – persona, dominum, obligation, contract and inheritance – composing the whole European private law tradition? Subsequent chapters attempt to provide possible responses to the question: what is Europe today? The answers diverge, depending on the research area. The inherent dichotomy of human rights protection in Europe and the concept of ‘one law, one court’ are investigated in the second chapter, whereas the third chapter focuses on asylum and the interrelation and interdependence of the Court of Justice of the EU and the European Court of Human Rights. The next three chapters concentrate on matters of equal treatment and non-discrimination. The first contribution in this part reflects on the crisis and methodological and conceptual issues faced by modern anti-discrimination law. It is followed by a specific analysis of the empowerment of women or gender-balancing in company boards. The third contribution reveals the impact of the Croatian anti-discrimination law on private law relations. The next chapter deals with the issue of social rights in Croatia and the method of their regulation in the context of the new European values.

brought about different reactions in the national legal systems and legal cultures of both old and new Member States. As such, Europe has effectively been reunited, but what about the convergence of national legal cultures? This is the focal point of the remaining chapters, which focus on various issues, from internal market, competition law, consumer welfare, liberalization of network industries to the EU capital market. The magnitude of EU activity in these areas offers conclusive evidence that old and new paradigms are evolving and shaping the future of the EU.