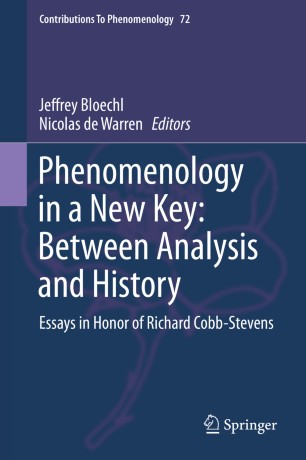 Phenomenology in a New Key: Between Analysis and History

Essays in Honor of Richard Cobb-Stevens

Part of the Contributions To Phenomenology book series (CTPH, volume 72)

In this collection of essays, the sophistication and vibrancy of contemporary phenomenological research is documented, including both its engagement with key figures in the history of philosophy, and with critical problems defining future directions of philosophical investigations. It honors the writings of Richard Cobb-Stevens, whose work in phenomenological philosophy, analytic philosophy and the history of philosophy has served as model for generations of philosophers working between these three fields of research. The essays collected in this volume provide a unique window on the contemporary state of the art in phenomenological philosophy by leading scholars of international reputation from North America and Europe. Historical figures such as Aristotle and Hobbes are innovatively brought into dialogue with phenomenological thinking. Phenomenological thinking is brought to bear on a wide variety of problems, from the nature of artworks and photography to questions concerning consciousness and knowledge. Among the topics discussed in these specially commissioned essays: phenomenology and Aristotle; the nature of the primal ego; Hobbes and Husserl; intentionality and reference; Neo-Aristotelian ethics; Husserl and Wittgenstein; photography; the nature of artworks.