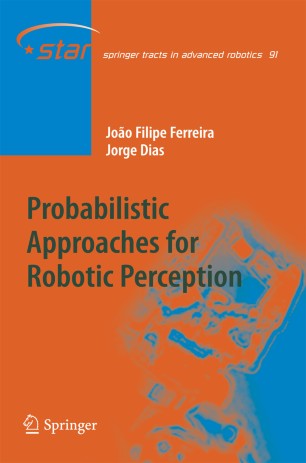 This book tries to address the following questions: How should the uncertainty and incompleteness inherent to sensing the environment be represented and modelled in a way that will increase the autonomy of a robot? How should a robotic system perceive, infer, decide and act efficiently? These are two of the challenging questions robotics community and robotic researchers have been facing.

The development of robotic domain by the 1980s spurred the convergence of automation to autonomy, and the field of robotics has consequently converged towards the field of artificial intelligence (AI). Since the end of that decade, the general public’s imagination has been stimulated by high expectations on autonomy, where AI and robotics try to solve difficult cognitive problems through algorithms developed from either philosophical and anthropological conjectures or incomplete notions of cognitive reasoning. Many of these developments do not unveil even a few of the processes through which biological organisms solve these same problems with little energy and computing resources. The tangible results of this research tendency were many robotic devices demonstrating good performance, but only under well-defined and constrained environments. The adaptability to different and more complex scenarios was very limited.

In this book, the application of Bayesian models and approaches are described in order to develop artificial cognitive systems that carry out complex tasks in real world environments, spurring the design of autonomous, intelligent and adaptive artificial systems, inherently dealing with uncertainty and the “irreducible incompleteness of models”.