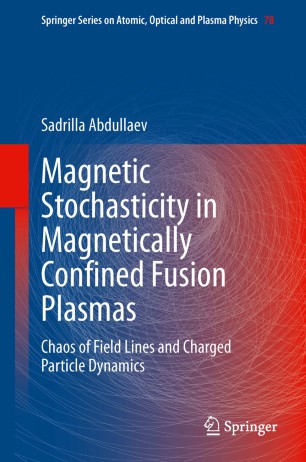 This is the first book to systematically consider the modern aspects of chaotic dynamics of magnetic field lines and charged particles in magnetically confined fusion plasmas.  The analytical models describing the generic features of equilibrium magnetic fields and  magnetic perturbations in modern fusion devices are presented. It describes mathematical and physical aspects of onset of chaos, generic properties of the structure of stochastic magnetic fields, transport of charged particles in tokamaks induced by magnetic perturbations, new aspects of particle turbulent transport, etc. The presentation is based on the classical and new unique mathematical tools of Hamiltonian dynamics, like the action--angle formalism, classical perturbation theory, canonical transformations of variables, symplectic mappings, the Poincaré-Melnikov integrals. They are extensively used for analytical studies as well as for numerical simulations of magnetic field lines, particle dynamics, their spatial structures and  statistical properties.  The numerous references to articles on the latest development in the area are provided.The book is intended for graduate students and researchers who interested in the modern problems of magnetic stochasticity in magnetically confined fusion plasmas. It is also useful for physicists and  mathematicians interested in new methods of Hamiltonian dynamics and  their applications.