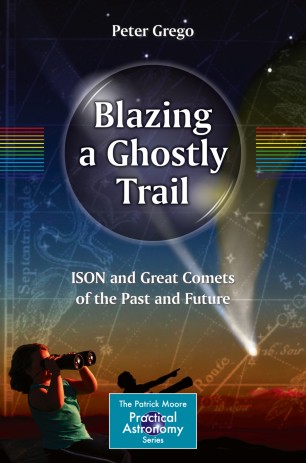 ISON and Great Comets of the Past and Future

A special celestial event climaxes towards the end of 2013, the arrival, fresh from the Oort Cloud, of Comet C/2012 S1 (ISON). By all predictions, this comet was set to be one of the most dazzling comets seen in modern history.

Sky watchers will have already been primed for C/2012 (ISON) earlier in 2013 with the apparition of another naked-eye comet, C/2011 L4 (PanSTARRS), and following C/2012 S1 (ISON) there is the prospect of 2012 K1 (PanSTARRS) reaching naked-eye visibility in August 2014. And there will be other bright cometary prospects in the near future, if we take into account the latest predictions.

This book sets the scene for the arrival of Comet C/2012 S1 and those comets following it over the next few years. It explains how sky watchers and amateur astronomers can practically follow comets, observe them, and record them. This is also a guide on how to keep abreast of the latest cometary discoveries and how to use publications, websites, programs, and apps to visualize and plan observations. The book includes:

·    descriptions of the nature, origins and observing history of comets

Peter Grego began his astronomical writing career by producing around 50 articles on astronomy and observing for the Birmingham (UK) Astronomical Society Journal (1982-1991). Through the years he has had dozens of articles appear in various publications, including Popular Astronomy, Sky & Telescope, Astronomy Now, Sky at Night magazine, Amateur Astronomy and Space Sciences, Fortean Times, Selenology, Gnomon, The Lunar Observer, The New Moon, The Encyclopedia of Astronomy and Astrophysics, Window on the Universe CD-ROMs, and Hoshinavi. He has contributed to several books by Ian Ridpath, Brian Jones and Robin Scagell, and revised the lunar material for both the latest edition of Norton’s Star Atlas and for the two latest editions of Philip’s Universal Atlas.

Peter also finds time to write and illustrate the monthly “MoonWatch” page for Astronomy Now magazine (since 1997) and is the astronomical observing expert and observing Q&A writer for Sky at Night magazine. He has given many talks to astronomical societies around the UK and has been featured on a number of radio and television broadcasts.

Finally, Grego is the author of numerous astronomy books, including Collision: Earth! (Cassell, 1998), Moon Observer’s Guide (Philips/Firefly, 2004), The Moon and How to Observe It (Springer, 2005), Need to Know? Stargazing (Collins, 2005), Need to Know? Universe (Collins, 2006), Solar System Observer’s Guide (Philips/Firefly, 2005), Exploring the Earth/Exploring the Moon/ Discovering the Solar System/ Voyage Through Space/ Discovering the Universe (five books in the QED Space Guides series, 2007), Venus and Mercury and How to Observe Them (Springer, 2008), The Great Big Book of Space (QED 2010), Galileo and 400 Years of Telescopic Astronomy (Springer, 2010), and Mars and How to Observe It (Springer, 2012).