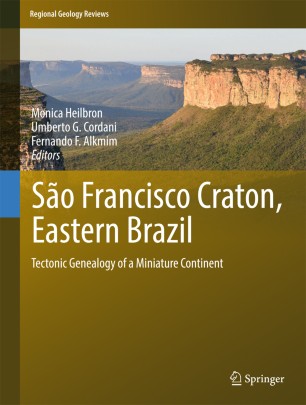 Tectonic Genealogy of a Miniature Continent

The region of the São Francisco river valley in eastern Brazil encompasses two main components of the geologic framework of the South American continent: the São Francisco craton and its marginal orogenic belts. Cratons, as the oldest, differentiated and relatively stable pieces of the continental lithosphere, preserve a substantial part of the Earth's memory. Orogenic belts, on the other hand, record collisional processes that occurred during a limited time span. Because of their topographic relief, mountain belts developed along craton margins provide however access to rock successions not exposed in the low lands of the adjacent cratons. The combination of geologic information obtained in cratonic domains and their marginal orogenic belts thus form the basis for deciphering substantial periods of Earth’s history.
Corresponding to the most intensively studied portion of the Precambrian nucleus of the South American plate, the São Francisco craton and its margins host a rock record that spans from the Paleoarchean to the Cenozoic. Precambrian sedimentary successions that witness ancient Earth processes - many of them of global significance - are especially well preserved and exposed in this region. With all these attributes the São Francisco craton together with its fringing orogenic belts can be viewed as a ‘continent within a continent’ or a ‘continent in miniature’.