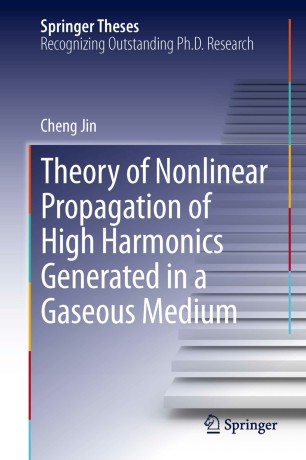 Theory of Nonlinear Propagation of High Harmonics Generated in a Gaseous Medium establishes the theoretical tools to study High-Order Harmonic Generation (HHG) by intense ultrafast infrared lasers in atoms and molecules. The macroscopic propagation of both laser and high-harmonic fields is taken into account by solving Maxwell's wave equations, while the single-atom or single-molecule response is treated with a quantitative rescattering theory by solving the time-dependent Schrödinger equation.

This book demonstrates for the first time that observed experimental HHG spectra of atoms and molecules can be accurately reproduced theoretically when precise experimental conditions are known. The macroscopic HHG can be expressed as a product of a macroscopic wave packet and a photorecombination cross section, where the former depends on laser and experimental conditions while the latter is the property of target atoms or molecules. The factorization makes it possible to retrieve microscopically atomic or molecular structure information from the measured macroscopic HHG spectra.

This book also investigates other important issues about HHG, such as contributions from multiple molecular orbitals, the minimum in the HHG spectrum, the spatial mode of laser beams, and the generation of an isolated attosecond pulse. Additionally, this book presents the photoelectron angular distribution of aligned molecules ionized by the HHG light.