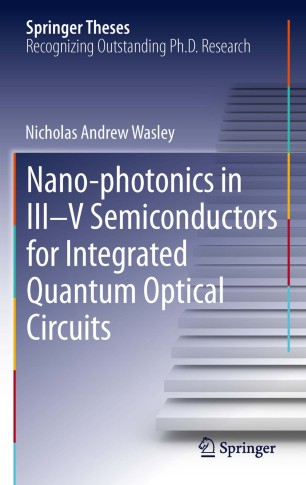 This thesis breaks new ground in the physics of photonic circuits for quantum optical applications. The photonic circuits are based either on ridge waveguides or photonic crystals, with embedded quantum dots providing the single qubit, quantum optical emitters. The highlight of the thesis is the first demonstration of a spin-photon interface using an all-waveguide geometry, a vital component of a quantum optical circuit, based on deterministic single photon emission from a single quantum dot. The work makes a further important contribution to the field by demonstrating  the effects and limitations that inevitable disorder places on photon propagation in photonic crystal waveguides, a further key component of quantum optical circuits. Overall the thesis offers a number of highly novel contributions to the field; those on chip circuits may prove to be the only means of scaling up the highly promising quantum-dot-based quantum information technology.

As a Manx Russell-Willis Scholar, Nicholas obtained an MPhys Physics degree with first class honours from the University of Manchester in 2009. He subsequently conducted PhD research in the Low Dimensional Structures and Devices group of the Department of Physics and Astronomy at the University of Sheffield under the supervision of Prof M. Skolnick (FRS), completing his thesis in January 2013. Nicholas has co-authored five peer-reviewed papers and presented work at a number of conferences including ICPS 2012 where he was nominated for the Young Scientist Best Paper Award. Nicholas currently works as a physicist for Sagentia in Harston, Cambridge.