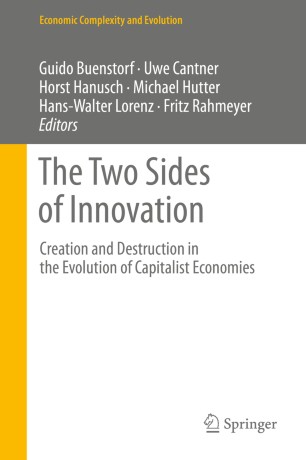 The Two Sides of Innovation

Creation and Destruction in the Evolution of Capitalist Economies

Part of the Economic Complexity and Evolution book series (ECAE)

​This volume is devoted to innovation with a special focus on its two sides, namely creation and destruction, and on its role in the evolution of capitalist economies. The first part of the book looks at innovation and its effects on economic performance, addressing issues of motives, behavioral rules under uncertainty, actor properties, and technology characteristics. The second part concentrates on potential consequences of innovative activities, in particular structural change, the “innovation-mediated” effect of skill-oriented policies on regional performance, the destructive effects of innovation activities, and the question whether novelty is always good. The role of innovation in the evolution of capitalism itself is discussed in the third part.

Guido Buenstorf is professor of economics at the University of Kassel in Germany. He is also co-director of the International Centre of Higher Education Research (INCHER-Kassel) as well as research professor at the Halle Institute of Economic Research (IWH). His research focuses on industry evolution, the economics of science and technology, as well as regional economics.

Uwe Cantner is Full Professor of Economics at the Friedrich Schiller University Jena since 2000 and since 2010 also Professor of Economics at the University of Southern Denmark, Odense. He studied Business Administration at the University of Augsburg und Economics at Wayne State University, Detroit MI. 1990 he received his PhD from the Ludwig Maximilians University Munich and he mastered his habilitation in economics 1996 at the University of Augsburg. 1997-98 he was Visiting Fellow at Université du Toulon et du Var and 1998-99 guest professor at the Université de Rennes I. In 2001 he took over as managing editor of the Journal of Evolutionary Economics. His research interests cover Economics of Innovation, Evolutionary Economics, Social and Economic Change, Productivity and Efficiency Measurement, and Behavioural Economics. Very much related to that he currently is serving as spokesman of the Doctoral Training Program DFG-GRK 1411 The Economics of Innovative Change, spokesman of the economics in the executive board of the International Max Planck Research School Adapting Behaviour in a Fundamentally Uncertain World, and director of the Jena Graduate School Human Behaviour in Social and Economic Change.

Horst Hanusch studied Economics at the Universities of Cologne, Bonn and Erlangen-Nuremberg, where he wrote his doctoral (1971) and habilitation thesis (1974). From 1974-2010 Full Professor of Economics at the University of Augsburg, since April 2010 Emeritus Professor. 1994 - 1997 President of the International Institute of Public Finance (IIPF); since 1986 co-founder and Secretary General of the International J. A. Schumpeter Society (ISS); since 1991 founder and co-editor of the Journal of Evolutionary Economics; 2006 co-founder of the Lisbon Civic Forum and until 2012 its Secretary General; from 2007 - 2011 Vice-President of the University of Augsburg. Fields of research: Comprehensive Neo-Schumpeterian Economics (CNSE)/Public sector economics in a CNSE-framework/ Patterns of Future-orientation in advanced and emerging economies/Global development strategies in a Neo-Schumpeterian context. Michael Hutter is Professor at the Social Science Research Center in Berlin, Germany.

Michael Hutter is research director at the Social Science Research Center Berlin (WZB), where he heads the unit „Cultural Sources of Newness“. He also holds a research professorship for “Knowledge and Innovation” at Technische Universität Berlin. He studied mathematics and economics in Germany and the U.S., and he held positions at the University of Munich and at Claremont McKenna College, CA. From 1987-2008, he held the chair for economic theory at Witten/Herdecke University. He was invited as a visiting scholar at the Rockefeller Foundation, Bellagio (2000), the School of Information Management Systems, UC Berkeley (2002), and the Getty Research Institute (2003 and 2007). His current research interests are in historical studies that demonstrate the interdependence of economic and artistic innovation, in the economics of the “experience economy”, and in issues of valuation in economic as well as in cultural sociology. His most recent larger publication is “Beyond Price. Value in Culture, Economics and the Arts” (Cambridge University Press, 2008), edited together with David Throsby

Hans-Walter Lorenz is Professor of Economics at the Friedrich-Schiller-University Jena.
Educated at the universities of Goettingen, Berkeley, and Los Angeles, he is now teaching macroeconomics, growth and business cycle theory with a special interest on the history of thought in these fields. His research interests include the mathematical theory of nonlinear dynamical systems, with numerous applications in various subdisciplines of e.g. physics and biology.

Fritz Rahmeyer graduated in economics from the University in Münster, Westphalia. He gained his doctorate and his qualification as a professor on economics at the University of Augsburg, where he became a professor of Economics in 1990. His fields of research are evolutionary economics in connection with applied industrial organization and environmental economics. Recently he shows an interest in the History of Economic Thought.