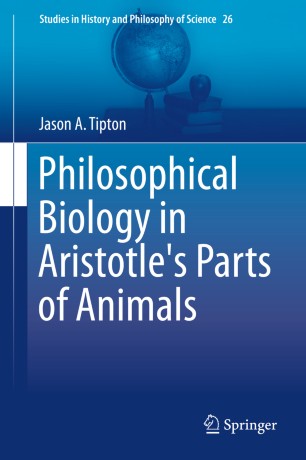 Part of the Studies in History and Philosophy of Science book series (AUST, volume 26)

This book provides a detailed analysis of Aristotle's  Parts of Animals.  It takes its bearings from the detailed natural history observations that inform, and in many ways penetrate, the philosophical argument.   This analysis raises the question of how easy it is to clearly disentangle what some might describe as the "merely" biological from the philosophical.   This book explores the notion and consequences of describing the activity in which Aristotle is engaged as philosophical biology.  Do readers of Aristotle have in mind organisms like sea squirts (ascidians) or sea cucumbers (holuthurians) when trying to understand Aristotle's argument regarding plant-like animals?  Do we need the phenomena in front of us to understand the terms of the philosophical argument in a richer way?  The discussion of plant-like animals is important to Aristotle because of the apparent continuum between plant and animal life.  Where does Aristotle draw the line?  Plant-like animals bring this question into focus and demonstrate the indeterminacy of any potential solution to the division.  This analysis of the Parts of Animals shows that the study of the nature of the organic world was Aristotle's way into such ontological problems as the relationship between matter and form, the interplay between form and function, and the heterogeneity of the many different kinds of being.