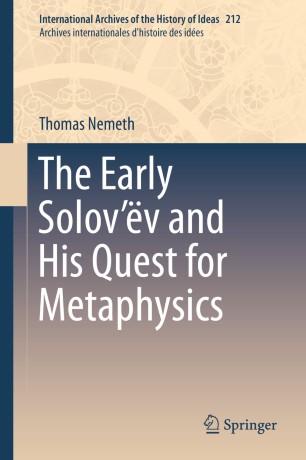 The Early Solov’ëv and His Quest for Metaphysics

This volume offers a critical examination of the early works of Vladimir Solov’ëv, Russia’s most famous and systematic philosopher. It presents a philosophical critique of his early writings up to 1881 from an immanent viewpoint and examines Solov’ëv’s intended contributions to philosophy against the background of German Idealism, including Schopenhauer, and the positivism of his day. Examining contemporary reactions to his writings by leading figures of his day, such as Chicherin and Kavelin, The Early Solov’ëv and His Quest for Metaphysics reveals the small but vibrant philosophical community in Russia during the immediate decades before the Bolshevik Revolution. It provides a detailed discussion of Solov’ëv’s confrontation with his philosophical opponents and shows how his emphasis on developing a metaphysical ontology rather than epistemology exerted a virtual paradigmatic influence on Russian philosophy for years to come. This volume also sets Solov’ëv’s writings against a detailed intellectual biography of these early years, drawing on letters to friends and relatives including reminiscences, and challenges many of the received claims concerning his actions and positions, particularly his alleged youthful mystical visions. In addition, the book features two appendices: one that sketches the early Russian reception of French positivism against which Solov’ëv reacted in the name of metaphysics and another that presents a fascinating look at the Solov’ëv family background, which produced at once intellectual as well as dysfunctional members. Presenting a rare picture of the non-Marxist intellectual scene in 19th century Russia, The Early Solov’ëv and His Quest for Metaphysics will be of interest to graduate students and researchers looking for a philosophically informed approach to this unique thinker and era.