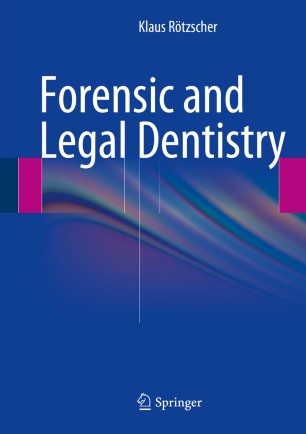 There is an increasing need for legal knowledge in the relationship between dentist and patient, as more and more often the dentist and the patient are meeting again in court. It is therefore advisable for the dentist to be familiar with the basics of law as it relates to dentistry, and especially the law of tort (including negligence and breach of duty of care). In addition, of course, dentists may be called upon to give evidence as impartial experts in legal cases.

This book both explains in detail diverse aspects of the law relating to dentistry and examines key issues in forensic odontostomatology. A central aim is to enable the dentist to achieve a realistic assessment of the legal situation and to reduce uncertainties and liability risk. To this end, experts from across the world discuss the dental law in their own countries, covering both civil and criminal law and highlighting key aspects such as patient rights, insurance, and compensation. In the section on forensic odontostomatology, extensive guidance is provided on development of the dentition, clinical findings and documentation, personal identification, age estimation, and the nature and significance of bite, tooth, and lip marks. This book will be an interesting and helpful source of information for all who practice in the field of dentistry as well as forensic scientists, lawyers, investigative and identification authorities, criminologists, prosecutors, insurance agents, and students.

Klaus Rötzscher, MD, DMD, graduated in medicine from Leipzig University in 1957 and subsequently specialized in general pathology. In 1967 he was recognized as a specialist in forensic medicine, and he completed his dental degree in 1968 after specializing in forensic dentistry, working for 10 years as a research assistant at the Institute of Forensic Medicine and Criminology at the University Leipzig. Dr. Rötzscher, while working in private practice, achieved increasing national and international recognition in the field of forensic odontostomatology. In Adelaide, Australia, October 1990, he was elected president of the International Organization of Forensic Odontostomatology (1990-1993). 1993 Dr. Rötzscher organized and directed the 13th meeting of IOFOS in Duesseldorf. 1994 he was awarded the Medal of Merit from the Rhineland-Palatinate in recognition of his successful term of office. From 1998 to 2010 Dr. Rötzscher was Chairman of the German Academy of Forensic Odontostomatology “AKFOS", a section of the German Society of Oral and Maxillofacial Surgery (DGZMK) and the German Society of Legal Medicine (DGRM). From 1994 to 2010 he wrote the AKFOS-Newsletter, the information of the Academy. In 2001 he was awarded the Hermann-Euler Medal on behalf of the Board of DGZMK for his activities in the field of forensic dentistry at home and abroad. In the years he visited international congresses all around the world and meetings as lecturer. He has published more than 70 articles in national and international journals and in 2000 published his book “Forensische Zahnmedizin” with Springer. Dr. Rötzscher worked in Thailand for more than 3 months after the Asian tsunami on Boxing Day 2004 identifying international flood victims. He was honoured with the Gösta Gustafson Award of AKFOS in 2006. On 21 December 2007 he was decorated with the Order of Merit of the Federal Republic of Germany.