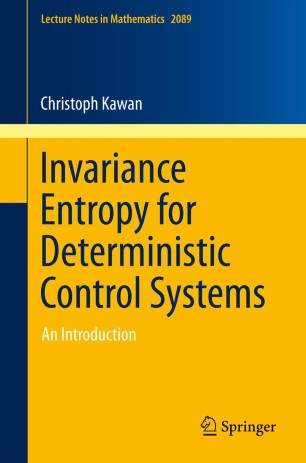 This monograph provides an introduction to the concept of invariance entropy, the central motivation of which lies in the need to deal with communication constraints in networked control systems. For the simplest possible network topology, consisting of one controller and one dynamical system connected by a digital channel, invariance entropy provides a measure for the smallest data rate above which it is possible to render a given subset of the state space invariant by means of a symbolic coder-controller pair. This concept is essentially equivalent to the notion of topological feedback entropy introduced by Nair, Evans, Mareels and Moran (Topological feedback entropy and nonlinear stabilization. IEEE Trans. Automat. Control 49 (2004), 1585–1597). The book presents the foundations of a theory which aims at finding expressions for invariance entropy in terms of dynamical quantities such as Lyapunov exponents. While both discrete-time and continuous-time systems are treated, the emphasis lies on systems given by differential equations.