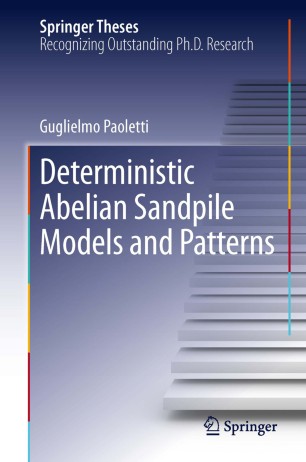 The model investigated in this work, a particular cellular automaton with stochastic evolution, was introduced as the simplest case of self-organized-criticality, that is, a dynamical system which shows algebraic long-range correlations without any tuning of parameters.
The author derives exact results which are potentially also interesting outside the area of critical phenomena. Exact means also site-by-site and not only ensemble average or coarse graining. Very complex and amazingly beautiful periodic patterns are often generated by the dynamics involved, especially in deterministic protocols in which the sand is added at chosen sites.
For example, the author studies the appearance of allometric structures, that is, patterns which grow in the same way in their whole body, and not only near their boundaries, as commonly occurs. The local conservation laws which govern the evolution of these patterns are also presented.
This work has already attracted interest, not only in non-equilibrium statistical mechanics, but also in mathematics, both in probability and in combinatorics. There are also interesting connections with number theory. Lastly, it also poses new questions about an old subject. As such, it will be of interest to computer practitioners, demonstrating the simplicity with which charming patterns can be obtained, as well as to researchers working in many other areas.