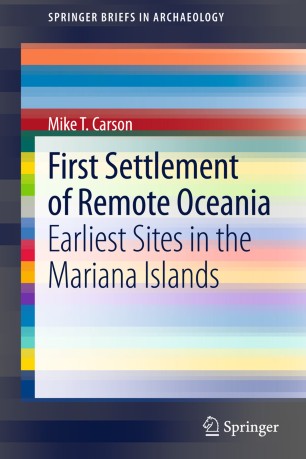 Earliest Sites in the Mariana Islands

Part of the SpringerBriefs in Archaeology book series (BRIEFSARCHAE, volume 1)

This book offers the only synthesis of early-period Marianas archaeology, marking the first human settlement of Remote Oceania about 1500 B.C.  In these remote islands of the northwest Pacific Ocean, archaeological discoveries now can define the oldest site contexts, dating, and artifacts of a Neolithic (late stone-age) people. This ancient settlement was accomplished by the world’s longest open-ocean voyage in human history at its time, more than 2000 km from any contemporary populated area. This work brings the isolated Mariana Islands into the forefront of scientific research of how people first settled Remote Oceania, further important for understanding long-distance human migration in general. Given this significance, the early Marianas sites deserve close attention that has been awkwardly missing until now. The author draws on his collective decades of intensive field research to define the earliest Marianas sites in scientific detail but accessible for broad readership. It covers three major topics: 1) situating the ancient sites in their original environmental contexts; 2) inventory of the early-period sites and their dating; and 3) the full range of pottery, stone tools, shell ornaments, and other artifacts.  The work concludes with discussing the impacts of their findings on Asia-Pacific archaeology and on human global migration studies.