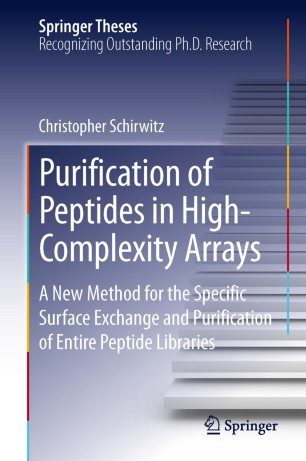 Purification of Peptides in High-Complexity Arrays

Christopher Schirwitz's thesis focuses on improving the quality of in situ synthesized high-complexity peptide micro arrays. Micro arrays containing proteins or small protein fragments in the form of peptides have become of great interest in proteomic research.
With the help of these microarrays a large number of potential target molecules can be screened for interaction with a probe in a short timeframe. However, protein and peptide
micro arrays are still lagging behind oligonucleotide arrays in terms of density, quality and manufacturing costs. A new approach developed at the German Cancer Research
Center (DKFZ) has improved the synthesis of high-density peptide arrays. The current technology is capable of producing arrays with up to 40,000 different peptides per square cm by means of micro particle-based solid phase peptide synthesis. However, in situ synthesis approaches bear a conceptual disadvantage: The quality of the peptides is dependent on the efficiency of the synthesis so that peptide fragments are present in the resulting array among the desired full-length peptides. In peptide-protein interaction studies such peptide fragments. The central achievement of this thesis is the development of a new method allowing for the fast one-step purification of entire
arrays without loss of resolution or spatial information. Christopher Schirwitz's work has resulted in a number of publications in high ranking journals.