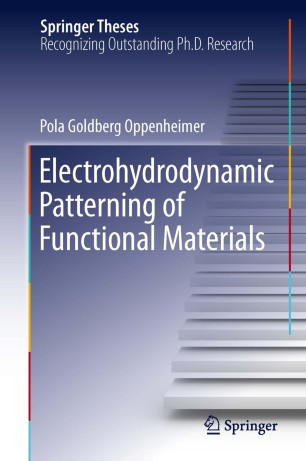 This thesis explores a route to induce and control the structure formation process in thin films by the use of strong electric fields. We investigate, establish and apply the use of the electrohydrodynamic (EHD) lithography as a versatile patterning tool on the sub-micrometre and nanometre length scales for functional materials. Thin films are ubiquitous, they are found in nature and used in almost every aspect of daily life. While film instabilities are often undesirable in nature and technology, they can be utilized to produce structures by precisely controlling the destabilization of the film. EHD lithography utilizes instabilities induced by means of an electric field to fabricate periodic structures. EHD patterning is set to become a competitive candidate for low-cost lithographic technology for a number of applications. Herein, the applied potential of this lithographic process is explored by expanding its applicability to a broad range of materials and by a simultaneous patterning of multilayer systems or functional polymers yielding hierarchical architectures with novel functionalities.
EHD pattern formation enables for instance, the fabrication of multi-scale structured arrays as surface enhanced Raman scattering (SERS)-active platforms. Furthermore, crystalline and conductive polymers are patterned using the EHD approach and the underlying structure formation mechanisms are discussed. This extension towards functional material systems offers interesting prospects for potential applications. Findings of this thesis are very promising for use in optoelectronic devices.