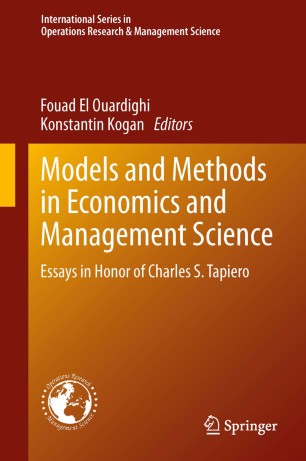 Models and Methods in Economics and Management Science

With this book, distinguished and notable contributors wish to honor Professor Charles S. Tapiero’s scientific achievements. Although it covers only a few of the directions Professor Tapiero has taken in his work, it presents important modern developments in theory and in diverse applications, as studied by his colleagues and followers, further advancing the topics Tapiero has been investigating. The book is divided into three parts featuring original contributions covering the following areas: general modeling and analysis; applications to marketing, economy and finance; and applications to operations and manufacturing.

Professor Tapiero is among the most active researchers in control theory; in the late sixties, he started to enthusiastically promote optimal control theory along with differential games, successfully applying it to diverse problems ranging from classical operations research models to finance, risk and insurance, marketing, transportation and operations management, conflict management and game theory, engineering, regional and urban sciences, environmental economics, and organizational behavior. Over the years, Professor Tapiero has produced over 300 papers and communications and 14 books, which have had a major impact on modern theoretical and applied research. Notable among his numerous pioneering scientific contributions are the use of graph theory in the behavioral sciences, the modeling of advertising as a random walk, the resolution of stochastic zero-sum differential games, the modeling of quality control as a stochastic competitive game, and the development of impulsive control methods in management. Charles Tapiero’s creativity applies both in formulating original issues, modeling complex phenomena and solving complex mathematical problems.