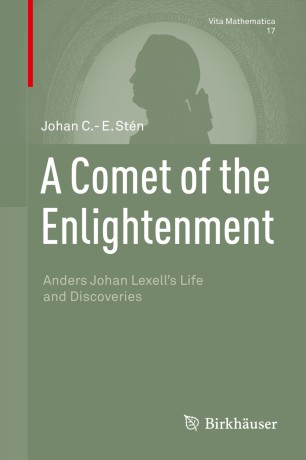 A Comet of the Enlightenment

The Finnish mathematician and astronomer Anders Johan Lexell (1740–1784) was a long-time close collaborator as well as the academic successor of Leonhard Euler at the Imperial Academy of Sciences in Saint Petersburg. Lexell was initially invited by Euler from his native town of Abo (Turku) in Finland to Saint Petersburg to assist in the mathematical processing of the astronomical data of the forthcoming transit of Venus of 1769. A few years later he became an ordinary member of the Academy. This is the first-ever full-length biography devoted to Lexell and his prolific scientific output. His rich correspondence especially from his grand tour to Germany, France and England reveals him as a lucid observer of the intellectual landscape of enlightened Europe. In the skies, a comet, a minor planet and a crater on the Moon named after Lexell also perpetuate his memory.

“Stén’s biography is a sound beginning to the critical study in English of the Euler circle and the internal operation and accomplishments in the mathematical sciences of the Petersburg Imperial Academy from 1766 to beyond 1784, based on vital correspondence and using its Protocols (Minutes) and Commentaries and Acta (Journals), significant sources in the history of mathematics, the early modern mathematical sciences, and the northern Enlightenment.” (Ronald Calinger, Mathematical Intelligencer, Vol. 39, 2017)

“It is an interesting read about an exciting man in the middle of several eighteenth-century scientific networks. Using extensive source material, Stén certainly manages to show that Lexell is a man worth studying and someone who was an important part of the St. Petersburg academy of the eighteenth century. He also provides a wealth of quotations and references that will definitely be of use to historians interested in eighteenth-century astronomy and mathematics.” (Jacob Orrje, Isis, Vol. 107 (1), March, 2016)

“A Comet of the Enlightenment, authored by Johan C.-E. Stén, is the first full biography of Anders Johan Lexell (1740–1784) … Stén does a masterful job of showing us not only Lexell the person, but also how Lexell’s professional life and choices were influenced by the political and academic cultures of his day. … Readers of A Comet of the Enlightenment will learn a lot about Lexell and even more about the enlightened culture in which he lived.” (Cindia Davis Stewart, MAA Reviews, October, 2014)

“The book is much more than a biography because it includes the broad cultural surrounding. … The book includes many beautiful pictures, some of them in colours. … At the end, the author gives a list of Lexell’s publications, containing 107 entries. This biography is to be highly recommended not only to historians, but as well to historians of astronomy and to historians of mathematics.” (Karin Reich, zbMATH, Vol. 1296, 2014)