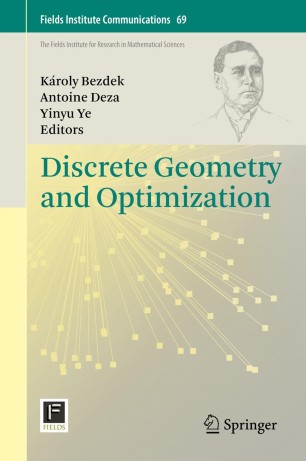 ​​Optimization has long been a source of both inspiration and applications for geometers, and conversely, discrete and convex geometry have provided the foundations for many optimization techniques, leading to a rich interplay between these subjects. The purpose of the Workshop on Discrete Geometry, the Conference on Discrete Geometry and Optimization, and the Workshop on Optimization, held in September 2011 at the Fields Institute, Toronto, was to further stimulate the interaction between geometers and optimizers. This volume reflects the interplay between these areas.

The inspiring Fejes Tóth Lecture Series, delivered by Thomas Hales of the University of Pittsburgh, exemplified this approach. While these fields have recently witnessed a lot of activity and successes, many questions remain open. For example, Fields medalist Stephen Smale stated that the question of the existence of a strongly polynomial time algorithm for linear optimization is one of the most important unsolved problems at the beginning of the 21st century. The broad range of topics covered in this volume demonstrates the many recent and fruitful connections between different approaches, and features novel results and state-of-the-art surveys as well as open problems.