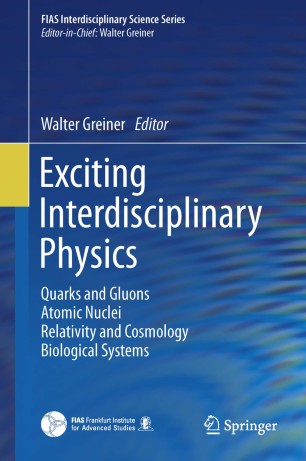 Nuclear physics is an exciting, broadly faceted field. It spans a wide range of topics, reaching from nuclear structure physics to high-energy physics, astrophysics and medical physics (heavy ion tumor therapy).  New developments are presented in this volume and the
status of research is reviewed. A major focus is put on nuclear structure physics, dealing with superheavy elements and with various forms of exotic nuclei: strange nuclei, very neutron rich nuclei, nuclei of antimatter. Also quantum electrodynamics of strong fields is addressed, which is linked to the occurrence of giant nuclear systems in, e.g., U+U collisions. At high energies nuclear physics joins with elementary particle physics. Various chapters address the theory of
elementary matter at high densities and temperature, in particular the quark gluon plasma which is predicted by quantum chromodynamics (QCD) to occur in high-energy heavy ion collisions. In the field of nuclear
astrophysics, the properties of neutron stars and quark stars are discussed. A topic which transcends nuclear physics is discussed in two chapters: The proposed pseudocomplex extension of Einstein's General Relativity leads to the prediction that there are no black
holes and that big bang cosmology has to be revised. Finally, the interdisciplinary nature of this volume is further accentuated by chapters on protein folding and on magnetoreception in birds and many
other animals.