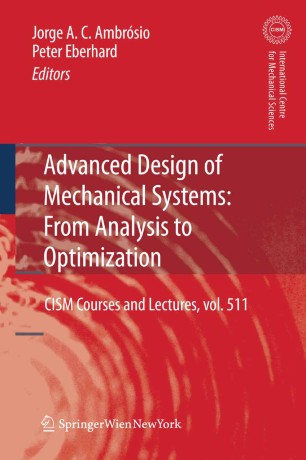 Advanced Design of Mechanical Systems: From Analysis to Optimization

Multibody systems are used extensively in the investigation of mechanical systems including structural and non-structural applications. It can be argued that among all the areas in solid mechanics the methodologies and applications associated to multibody dynamics are those that provide an ideal framework to aggregate d- ferent disciplines. This idea is clearly reflected, e. g. , in the multidisciplinary applications in biomechanics that use multibody dynamics to describe the motion of the biological entities, in finite elements where multibody dynamics provides - werful tools to describe large motion and kinematic restrictions between system components, in system control where the methodologies used in multibody dynamics are the prime form of describing the systems under analysis, or even in many - plications that involve fluid-structure interaction or aero elasticity. The development of industrial products or the development of analysis tools, using multibody dynamics methodologies, requires that the final result of the devel- ments are the best possible within some limitations, i. e. , they must be optimal. Furthermore, the performance of the developed systems must either be relatively insensitive to some of their design parameters or be sensitive in a controlled manner to other variables. Therefore, the sensitivity analysis of such systems is fundamental to support the decision making process. This book presents a broad range of tools for designing mechanical systems ranging from the kinematic and dynamic analysis of rigid and flexible multibody systems to their advanced optimization.