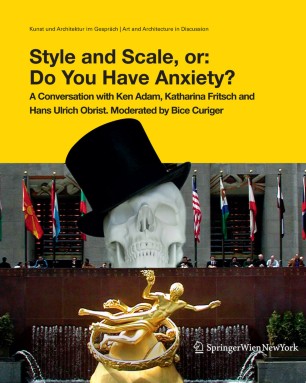 Style and Scale, or: Do You Have Anxiety?

Bice Curiger, art historian and curator, studied art history, folklore and literary criticism at Zurich University. She worked as a curator and art critic during the 1970s. She co-founded Parkett in 1984 and has been its editor-in-chief since then. She has served as a permanent curator at the Kunsthaus Zurich since 1993, where she curated exhibitions such as Endstation Sehnsucht (1994), Birth of the Cool (1997), Freie Sicht aufs Mittelmeer (1997), and The Expanded Eye (2006). She has been the editor of TATE ETC., published by the Tate Gallery, London, since 2005.

Katharina Fritsch, artist, was born in 1956 in Essen, Germany. She studied history and art history in Münster. She also studied under Fritz Schwegler at the Dusseldorf Art Academy between 1977 and 1984. She has been a professor of sculpture at the Münster Academy of Art (School of Applied Arts) since 2001. Solo exhibitions of her work have been held at the Kunsthalle Basel, ICA London (1988), Dia Center for the Arts, New York (1993), Tate Gallery, London, and the Museum of Contemporary Art, Chicago (2001). She won the Art Award of the City of Aachen in 1995 and the 2008 Piepenbrock Prize for Sculpture.

Hans Ulrich Obrist was born in 1968 in Zurich. He worked as a curator at the Musée d’Art Moderne de la Ville de Paris and has curated many exhibitions worldwide. He has served as the co-director, exhibitions and programs and director of international projects an der Serpentine Gallery, London since 2006. He is the editor of the The Conversation Series, Do it, dontstopdontstopdontstopdontstop book series and a number of other publications.