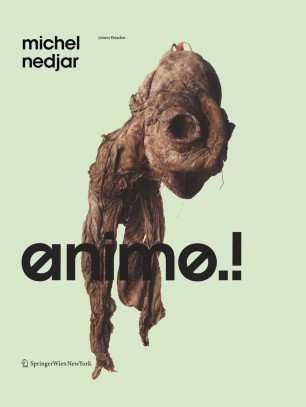 When Ifirst sawworks by Michel Nedjar three decades ago, Iwasdeeply touched from the start. His painting work in particular exerted a strong fascination upon me. With his bare hand and sometimes with the help of a pressing iron - in order to introduce chance - he drawsthe 'hidden' outof himself, ashe puts it. The archaic,the original reminds me ofthe roots of artistic endeavour. Roots like they could be found in tribal art thousands ofyears - and up to afew generations ago. Nedjar is a child of our time and subject to all influences. Yet his creations are not influenced by present dayartistic tendencies.He refusesany kind ofacademism. Although he does love museums and art, he still finds his models in the past. of their morbid The artist's early "dolls" took some getting used to on my part because appearance. But after a while their initially deterring effect wore off. and now they have a special place.which Itry to establish through the cover ofthe book. Ihavemet Michel Nedjaron many occasions at various exhibitions in Europeandthe USas well asin the HouseofArtists. Nedjar hasbuilt astrong connection to the Gugging Artists. andwhen JohannHauserdied,I receivedadrawing by Michel Nedjarofacrossin honourof Hauser. whom he held in great esteem. JeanDubuffet's support through early purchases, which took him to the Centre Georges Pompidou in quick succession,did nothingto change hiswork or determination.Hisriseto the arguably most important French artist alive, whose works are still considered art brut, wasfollowed by an international career in the same field.