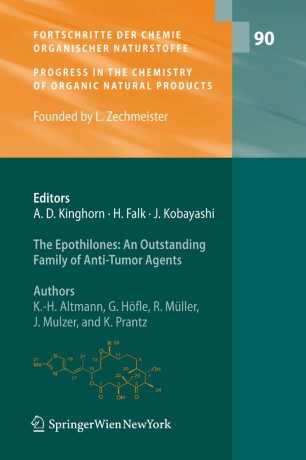 The Epothilones: An Outstanding Family of Anti-Tumor Agents

From Soil to the Clinic

Epothilones have received unusual attention over the past ten years. They are novel antitumor drugs which very much like their predecessor paclitaxel (Taxol) act via microtubule stabilization. In comparison to paclitaxel and a number of alternative drugs with a similar mode of bioaction (e.g. laulimalide, eleutherobin, peluroside, discodermolide) the epothilones have significant advantages, above all very high activity in the nanomolar range and low susceptibility towards multidrug resistance. Epothilone B and several derivatives thereof are in phase I-III clinical trials; one of them (ixabepilone, BMS) is already on the market, others are supposed to appear on the market in the near future. All naturally occurring epothilones have been isolated from Sorangium cellulosum; their antitumor action is traced back to the stabilization of microtubules. In consequence, the formation of the mitototic spindle is prohibited and the cell undergoes apoptosis.