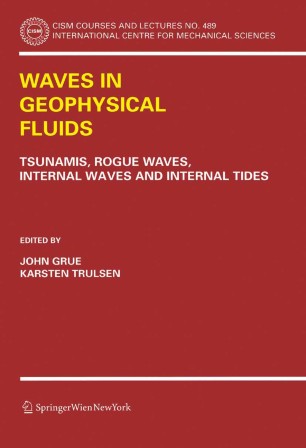 This volume - Waves in Geophysical Fluids - contains extended versions of the lec­ tures that were given at a summerschool in Centre International des Sciences Mecaniques (CISM), Udine, Italy, during the week of 11-15 July 2005. The subjects of the school covered: the formation of the very long tsunamis, the much shorter rogue waves taking place on the sea surface, very large oceanic internal waves and, finally, internal tides and hot spots in the ocean. The subjects were chosen because of their implications to the safety of human activity in and in relation to the ocean environment, and the impact of the processes to the ocean currents and climate. The physical phenomena and how to mathematically and numerically model them were described in the lectures. The giant and destructive tsunami that occurred in the Indian Ocean on the 26th December 2004 urged scientists to communicate to the authorities and public the existing knowledge of tsunami wave modelling, and how the forecasts can be used for warning and evacuation of the people in the near shore region, corresponding to what is practice along the coasts of the Pacific Ocean. The first chapter of this book is precicsely describing the current practice of the forecasting and risk evaluation of tsunamis, and includes also an overview of the geograpical distribution of tsunami sources in the world's oceans.