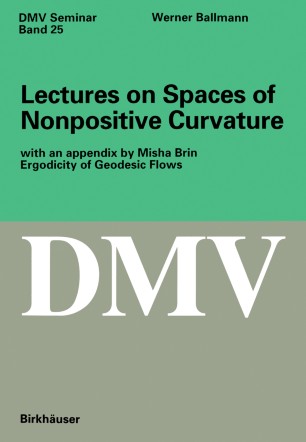 Lectures on Spaces of Nonpositive Curvature

Singular spaces with upper curvature bounds and, in particular, spaces of nonpositive curvature, have been of interest in many fields, including geometric (and combinatorial) group theory, topology, dynamical systems and probability theory. In the first two chapters of the book, a concise introduction into these spaces is given, culminating in the Hadamard-Cartan theorem and the discussion of the ideal boundary at infinity for simply connected complete spaces of nonpositive curvature. In the third chapter, qualitative properties of the geodesic flow on geodesically complete spaces of nonpositive curvature are discussed, as are random walks on groups of isometries of nonpositively curved spaces. The main class of spaces considered should be precisely complementary to symmetric spaces of higher rank and Euclidean buildings of dimension at least two (Rank Rigidity conjecture). In the smooth case, this is known and is the content of the Rank Rigidity theorem. An updated version of the proof of the latter theorem (in the smooth case) is presented in Chapter IV of the book. This chapter contains also a short introduction into the geometry of the unit tangent bundle of a Riemannian manifold and the basic facts about the geodesic flow. In an appendix by Misha Brin, a self-contained and short proof of the ergodicity of the geodesic flow of a compact Riemannian manifold of negative curvature is given. The proof is elementary and should be accessible to the non-specialist. Some of the essential features and problems of the ergodic theory of smooth dynamical systems are discussed, and the appendix can serve as an introduction into this theory.