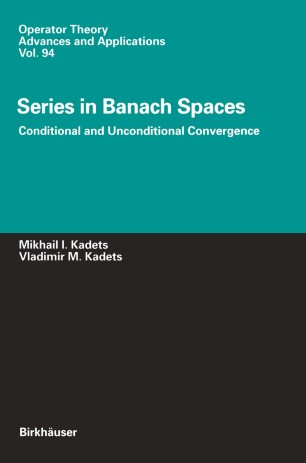 Series of scalars, vectors, or functions are among the fundamental objects of mathematical analysis. When the arrangement of the terms is fixed, investigating a series amounts to investigating the sequence of its partial sums. In this case the theory of series is a part of the theory of sequences, which deals with their convergence, asymptotic behavior, etc. The specific character of the theory of series manifests itself when one considers rearrangements (permutations) of the terms of a series, which brings combinatorial considerations into the problems studied. The phenomenon that a numerical series can change its sum when the order of its terms is changed is one of the most impressive facts encountered in a university analysis course. The present book is devoted precisely to this aspect of the theory of series whose terms are elements of Banach (as well as other topological linear) spaces. The exposition focuses on two complementary problems. The first is to char­ acterize those series in a given space that remain convergent (and have the same sum) for any rearrangement of their terms; such series are usually called uncon­ ditionally convergent. The second problem is, when a series converges only for certain rearrangements of its terms (in other words, converges conditionally), to describe its sum range, i.e., the set of sums of all its convergent rearrangements.