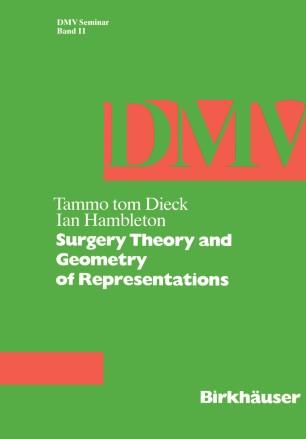 Surgery Theory and Geometry of Representations

These notes were prepared for the DMV-Seminar held in Dusseldorf, Schloss Mickeln from June 28 to July 5, 1987. They consist of two parts which can be read independently. The reader is presumed to have a basic education in differential and algebraic topology. Surgery theory is the basic tool for the investigation of differential and topological manifolds. A systematic development of the theory is a long and difficult task. The purpose of these notes is to describe simple examples and at the same time to give an introduction to some of the systematic parts of the theory. The first part is concerned with examples. They are related to representations of finite groups and group actions on spheres, and are considered as a generalisation of the spherical space form problem. The second part reviews the general setting of surgery theory and reports on the computation of the surgery abstraction groups. Both parts present material not covered in any textbook and also give an introduction to the literature and areas of research. 1. REPRESENTATION FORMS AND HOMOTOPY REPRESENTATIONS. Tammo tom Dieck Mathematical Institute Gottingen University Fed. Rep. of Germany Let G be a (finite) group. We consider group actions of G on spheres and spherelike spaces.