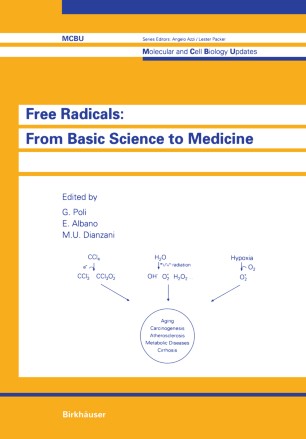 Free radical-mediated reactions have been well known in chemistry and physical chemistry for many years. Applying this knowledge to living organisms, biochemists have shown that reactive free radicals are formed at many intracellular sites during normal metabolism, and they have started to suggest possible roles in various pathological processes and conditions, for example in radiation damage, in the metabolism of xenobiotics, in carcinogenesis and in metabolic disorders. At present, a large and relevant mass of experimental evidence supports the view that reactive free radicals are involved in the pathogenesis of several diseases and syndromes. This literature has captured the attention and interest of people involved in the biomedical field. Exciting developments in radical research are probable in the near future, establishing a greater interaction between basic science research and medicine. While the task of defining the involvement of free radicals in human pathology is difficult, it is nonetheless extremely important that such interaction be fulfilled as soon as possible. These were the considerations motivating us during the organization of the VI Biennial Meeting of the International Society for Free Radical Research held in Torino, Italy, in June 1992, and also during the preparation of this book. Experts in the various aspects of free radical research were invited to participate in the Torino Meeting and to contribute chapters for this volume.