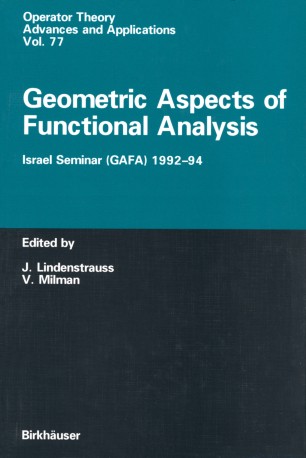 This is the sixth published volume of the Israel Seminar on Geometric Aspects of Functional Analysis. The previous volumes are 1983-84 published privately by Tel Aviv University 1985-86 Springer Lecture Notes, Vol. 1267 1986-87 Springer Lecture Notes, Vol. 1317 1987-88 Springer Lecture Notes, Vol. 1376 1989-90 Springer Lecture Notes, Vol. 1469 As in the previous vC!lumes the central subject of -this volume is Banach space theory in its various aspects. In view of the spectacular development in infinite-dimensional Banach space theory in recent years (like the solution of the hyperplane problem, the unconditional basic sequence problem and the distortion problem in Hilbert space) it is quite natural that the present volume contains substantially more contributions in this direction than the previous volumes. This volume also contains many important contributions in the "traditional directions" of this seminar such as probabilistic methods in functional analysis, non-linear theory, harmonic analysis and especially the local theory of Banach spaces and its connection to classical convexity theory in IRn. The papers in this volume are original research papers and include an invited survey by Alexander Olevskii of Kolmogorov's work on Fourier analysis (which was presented at a special meeting on the occasion of the 90th birthday of A. N. Kol­ mogorov). We are very grateful to Mrs. M. Hercberg for her generous help in many directions, which made the publication of this volume possible. Joram Lindenstrauss, Vitali Milman 1992-1994 Operator Theory: Advances and Applications, Vol.