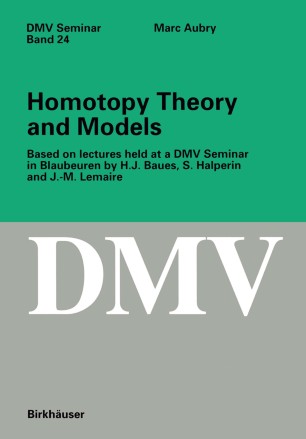 Based on Lectures held at a DMV Seminar in Blaubeuren by H.J. Baues, S. Halperin and J.-M. Lemaire

In keeping with the general aim of the "D.M.V.-Seminar" series, this book is princi­ pally a report on a group of lectures held at Blaubeuren by Professors H. J. Baues, S. Halperin and J.-M. Lemaire, from October 30 to November 7, 1988. These lec­ tures were devoted to providing an introduction to the theory of models in algebraic homotopy. The three lecturers acted in concert to produce a coherent exposition of the theory. Commencing from a common starting point, each of them then proceeded naturally to his own subject of research. The reader who is already familiar with their scientific work will certainly give the lecturers their due. Having been asked by the speakers to take on the responsibility of writing down the notes, it seemed to me that the material elucidated in the short span of fifteen hours was too dense to appear, unedited, in book form. Some amplification was necessary. Of course I submitted to them the final version of this book, which received their approval. I thank them for this token of confidence. I am also grateful to all three for their help and advice in writing this book. I am particularly indebted to J.-M. Lemaire who was indeed very often consulted. For basic notions (in particular those concerning homotopy groups, CW­ complexes, (co)homology and homological algebra) the reader is advised to refer to the fundamental books written by E. H. Spanier [47], R. M. Switzer [49] and G. Whitehead [52].