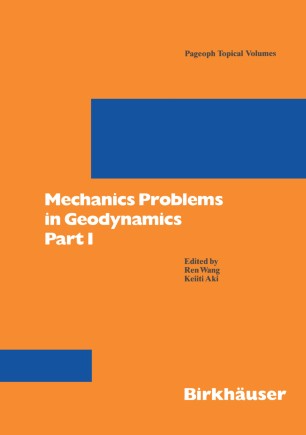 Mechanics Problems in Geodynamics Part I

Geodynamics concerns with the dynamics of the global motion of the earth, of the motion in the earth's interior and its interaction with surface features, together with the mechanical processes in the deformation and rupture of geological structures. Its final object is to determine the driving mechanism of these motions which is highly interdisciplinary. In preparing the basic geological, geophysical data required for a comprehensive mechanical analysis, there are also many mechanical problems involved, which means the problem is coupled in a complicated manner with geophysics, rock mechanics, seismology, structural geology etc. This topical issue is Part I of the Proceedings of an IUTAM / IASPEI Symposium on Mechanics Problems in Geodynamics held in Beijing, September 1994. It addresses different aspects of mechanics problems in geodynamics involving tectonic analyses, lithospheric structures, rheology and the fracture of earth media, mantle flow, either globally or regionally, and either by forward or inverse analyses or numerical simulation.