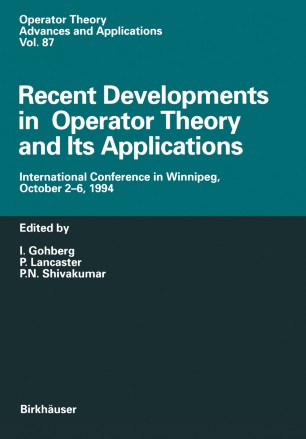 Recent Developments in Operator Theory and Its Applications

The present volume contains the proceedings of the International Conference on Ap­ plications of Operator Theory held in Winnipeg, Canada (October 2nd to 6th, 1994), which was organized by the Institute of Industrial Mathematical Sciences (IIMS) of the University of Manitoba. At this conference 92 participants representing 15 countries par­ ticipated, and 64 papers were presented. This meeting was the second of a linked pair. The first was a program of advanced instruction held at the Fields Institute, Ontario, followed by a research conference. The first of these events gave rise to the volume "Lectures on Operator Theory and its Applications", published by the American Mathematical Society for the Fields Institute in 1995. These two events were the creation of the following Program Committee: M. A. Dahleh (M. I. T. ) P. A. Fillmore (Dalhousie) B. A. Francis (Toronto) F. Ghahramani (Manitoba) K. Glover (Cambridge) I. Gohberg (Tel Aviv) T. Kailath (Stanford) P. Lancaster (Calgary), Chair H. Langer (Vienna) P. N. Shivakumar (Manitoba) A. A. Shkalikov (Moscow) B. Simon (Cal. Tech. ) H. Widom (Santa Cruz) Both events focused on the following main topics: Infinite matrices and projection methods, linear operators on indefinite scalar product spaces, differential operators and mathematical systems theory and control. This volume contains a selection of papers in modern operator theory and its appli­ cations. They are dedicated to recent achievements and many are written by leaders in the mentioned fields.