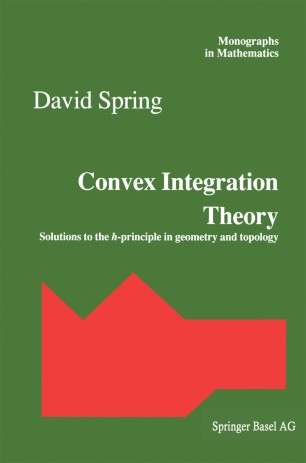 Solutions to the h-principle in geometry and topology

Part of the Monographs in Mathematics book series (MMA, volume 92)

§1. Historical Remarks Convex Integration theory, first introduced by M. Gromov [17], is one of three general methods in immersion-theoretic topology for solving a broad range of problems in geometry and topology. The other methods are: (i) Removal of Singularities, introduced by M. Gromov and Y. Eliashberg [8]; (ii) the covering homotopy method which, following M. Gromov's thesis [16], is also referred to as the method of sheaves. The covering homotopy method is due originally to S. Smale [36] who proved a crucial covering homotopy result in order to solve the classification problem for immersions of spheres in Euclidean space. These general methods are not linearly related in the sense that succes­ sive methods subsumed the previous methods. Each method has its own distinct foundation, based on an independent geometrical or analytical insight. Conse­ quently, each method has a range of applications to problems in topology that are best suited to its particular insight. For example, a distinguishing feature of Convex Integration theory is that it applies to solve closed relations in jet spaces, including certain general classes of underdetermined non-linear systems of par­ tial differential equations. As a case of interest, the Nash-Kuiper Cl-isometrie immersion theorem ean be reformulated and proved using Convex Integration theory (cf. Gromov [18]). No such results on closed relations in jet spaees can be proved by means of the other two methods.