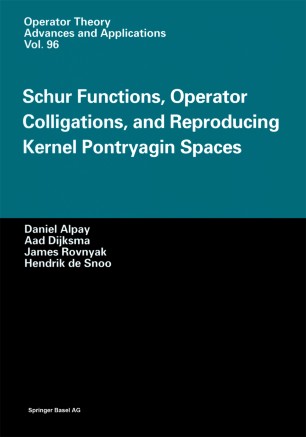 Generalized Schur functions are scalar- or operator-valued holomorphic functions such that certain associated kernels have a finite number of negative squares. This book develops the realization theory of such functions as characteristic functions of coisometric, isometric, and unitary colligations whose state spaces are reproducing kernel Pontryagin spaces. This provides a modern system theory setting for the relationship between invariant subspaces and factorization, operator models, Krein-Langer factorizations, and other topics. The book is intended for students and researchers in mathematics and engineering. An introductory chapter supplies background material, including reproducing kernel Pontryagin spaces, complementary spaces in the sense of de Branges, and a key result on defining operators as closures of linear relations. The presentation is self-contained and streamlined so that the indefinite case is handled completely parallel to the definite case.