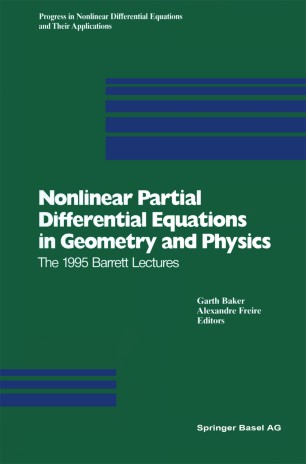 Part of the Progress in Nonlinear Differential Equations and Their Applications book series (PNLDE, volume 29)

This volume presents the proceedings of a series of lectures hosted by the Math­ ematics Department of The University of Tennessee, Knoxville, March 22-24, 1995, under the title "Nonlinear Partial Differential Equations in Geometry and Physics" . While the relevance of partial differential equations to problems in differen­ tial geometry has been recognized since the early days of the latter subject, the idea that differential equations of differential-geometric origin can be useful in the formulation of physical theories is a much more recent one. Perhaps the earliest emergence of systems of nonlinear partial differential equations having deep geo­ metric and physical importance were the Einstein equations of general relativity (1915). Several basic aspects of the initial value problem for the Einstein equa­ tions, such as existence, regularity and stability of solutions remain prime research areas today. eighty years after Einstein's work. An even more recent development is the realization that structures originally the context of models in theoretical physics may turn out to have introduced in important geometric or topological applications. Perhaps its emergence can be traced back to 1954, with the introduction of a non-abelian version of Maxwell's equations as a model in elementary-particle physics, by the physicists C.N. Yang and R. Mills. The rich geometric structure ofthe Yang-Mills equations was brought to the attention of mathematicians through work of M.F. Atiyah, :"J. Hitchin, I.