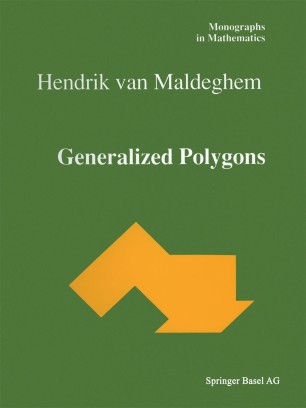 Part of the Monographs in Mathematics book series (MMA, volume 93)

This book is intended to be an introduction to the fascinating theory ofgeneralized polygons for both the graduate student and the specialized researcher in the field. It gathers together a lot of basic properties (some of which are usually referred to in research papers as belonging to folklore) and very recent and sometimes deep results. I have chosen a fairly strict geometrical approach, which requires some knowledge of basic projective geometry. Yet, it enables one to prove some typically group-theoretical results such as the determination of the automorphism groups of certain Moufang polygons. As such, some basic group-theoretical knowledge is required of the reader. The notion of a generalized polygon is a relatively recent one. But it is one of the most important concepts in incidence geometry. Generalized polygons are the building bricks of Tits buildings. They are the prototypes and precursors of more general geometries such as partial geometries, partial quadrangles, semi-partial ge­ ometries, near polygons, Moore geometries, etc. The main examples of generalized polygons are the natural geometries associated with groups of Lie type of relative rank 2. This is where group theory comes in and we come to the historical raison d'etre of generalized polygons. In 1959 Jacques Tits discovered the simple groups of type 3D by classifying the 4 trialities with at least one absolute point of a D -geometry. The method was 4 predominantly geometric, and so not surprisingly the corresponding geometries (the twisted triality hexagons) came into play. Generalized hexagons were born.