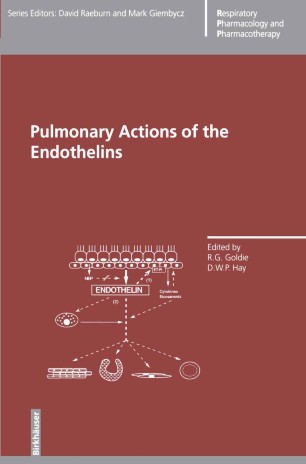 Pulmonary Actions of the Endothelins

Part of the Respiratory Pharmacology and Pharmacotherapy book series (RPP)

The biology of the family of endogenous autocrine peptides known as the endothelins (ETs) has been a source of intense study for researchers since 1988, following the identification of ET-l as the previously described endothelium-derived contractile factor. Initial interest focussed on the actions of the ETs in the cardiovascular system, and this remains the pri­ mary source of published work involving these peptides. Importantly, evi­ dence is mounting for a significant mediator role for ET-l in cardiovascu­ lar diseases including systemic hypertension and congestive heart failure. However, it was also recognized early on that the ETs exert an array of powerful actions in the respiratory tract, many of which prompted specula­ tion concerning mediator roles for ET-l in several lung diseases including asthma and pulmonary hypertension. In recent years the evidence for the involvement of ET-l in lung diseases has become more compelling. There is now real hope and anticipation that novel ET receptor antagonists may eventually be used therapeutically against asthma and other major lung pathologies. It is this atmosphere of excitement created by new discoveries and the increasing scientific ratio­ nale for a significant impact ofthe ETs in pulmonary diseases that prompt­ ed the creation of this book, the first on this topic. Most of the information presented relates to ET-l, which is the most widely studied member of the ET family.