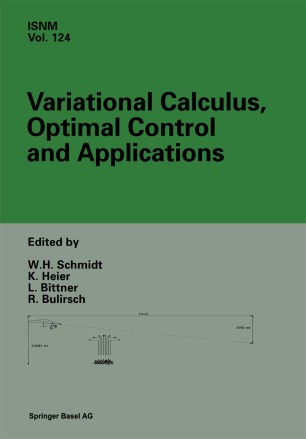 The 12th conference on "Variational Calculus, Optimal Control and Applications" took place September 23-27, 1996, in Trassenheide on the Baltic Sea island of Use­ dom. Seventy mathematicians from ten countries participated. The preceding eleven conferences, too, were held in places of natural beauty throughout West Pomerania; the first time, in 1972, in Zinnowitz, which is in the immediate area of Trassenheide. The conferences were founded, and led ten times, by Professor Bittner (Greifswald) and Professor KlCitzler (Leipzig), who both celebrated their 65th birthdays in 1996. The 12th conference in Trassenheide, was, therefore, also dedicated to L. Bittner and R. Klotzler. Both scientists made a lasting impression on control theory in the former GDR. Originally, the conferences served to promote the exchange of research results. In the first years, most of the lectures were theoretical, but in the last few conferences practical applications have been given more attention. Besides their pioneering theoretical works, both honorees have also always dealt with applications problems. L. Bittner has, for example, examined optimal control of nuclear reactors and associated safety aspects. Since 1992 he has been working on applications in optimal control in flight dynamics. R. Klotzler recently applied his results on optimal autobahn planning to the south tangent in Leipzig. The contributions published in these proceedings reflect the trend to practical problems; starting points are often questions from flight dynamics.